In Ridley Scott's 2007 film American Gangster, Denzel Washington was given the opportunity to usher in a new era of uptown gangster flicks. Bumpy Johnson, who led the underworld during the actual Harlem Renaissance, held his own against the Irish and Jewish mobs and enjoyed a long-standing partnership with New York's Italian criminal organization, had maintained that prestigious post for all time. Together with Harlem's crime heiress Stephanie St. Clair and her gang, the 40 Thieves, Johnson built his fortune in the Bronx's 1920s and 1930s turf battle with Dutch Schultz. The directive to kill Schultz and designate Bumpy as a family member was given by Lucky Luciano. Years of chess games were played by Bumpy and the leader of the Five Families in front of the YMCA on 135th Street.

In Francis Ford Coppola's 1984 gangster movie The Cotton Club, Laurence Fishburne played "Bumpy Rhodes," a character based on Bumpy Johnson, and he returned the role as Johnson in the 1997 movie Hoodlum. Forest Whitaker gets paroled into the role of the Godfather of Harlem in the Epix television series. Bumpy is portrayed by Clarence Williams III in American Gangster. The movie begins in his presence and at his funeral. His lessons linger over the ascent of a successor.

Bumpy's right hand guy and driver was Frank Lucas. If American Gangster is to be believed, he wasn't simply above the law in the late 1960s and early 1970s; he was the top outlaw. Compared to any Mafia soldier, capo, or conssigliere, he had a greater street rank. He was "the guy" in a world of "made men," a real drug lord with the "Blue Magic," the strongest, cheapest heroin in the entire city. Lucas cut the main vein.

“The man I worked for, he had one of the biggest companies in New York City. He ran it for more than 50 years. Fifteen years, eight months, nine days, I was with him every day. Bumpy was rich, but he wasn’t white man rich, you see he wasn’t wealthy. He didn’t own his own company. He thought he did but he didn’t. He just managed it. White man owned it, so they owned him. Nobody owns me though. Because I own my company. And my company sells a product that’s better than the competition at a price that’s lower than the competition,” Washington’s Lucas says in American Gangster. 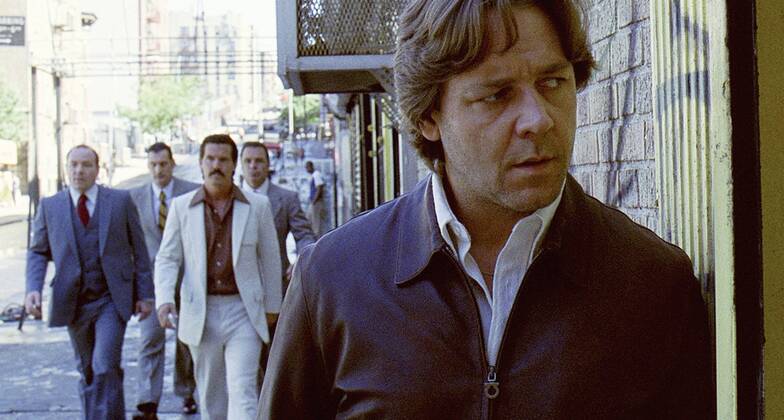 American Gangster, which takes place during the Vietnam War, depicts Lucas traveling to Indochina by himself to avoid paying an intermediary for his drugs. The Kuomintang general (Ric Young) is bursting with inventory that is anxious to shift, and if there is one thing you learn about New York, it is to never pay retail. Lucas and a family member who is in the military arrange to have the narcotics delivered to America buried in the coffins of deceased soldiers, a scheme that became known as the "Cadaver Connection." This is a highly intriguing historical fact, and Frank is a creative businessman.

Lucas is portrayed by Washington as untouchable. He establishes his street cred by shooting Tango (Idris Elba), his 20 percent-grabbing rival, in the head in front of everyone within a two-block radius, before returning to his lunch table. He begins with, "You are what you are in this world." "That may be any of two things. He transitions from being Bumpy's former driver to the new ruler of the town in that one moment, saying, "Either you're somebody, or you're nobody." Nobody is going to expose him. He is quite certain about this. Behind him lies the hood.

Det. Richie Roberts, the movie's anti-villain, who is portrayed by Russell Crowe, is given just as much screen time as the main character, which transforms American Gangster into a mix of the gangster and police procedural subgenres. Roberts is an untouchable as well, but in the vein of movies like The Untouchables and Serpico. He is the worst type of uncorruptible police officer. Roberts' history with child custody first seems to be character-building fluff, but it serves as a useful comparison between the meticulous family-first crook and the scruffy clean officer.

For the same reason that Detective Alonzo Harris in Washington turned on his colleague Jake Hoyt (Ethan Hawke) in the 2001 film Training Day, Roberts is despised by his other officers: he refuses to take easy money. The lines between local heroes are blurred in both movies. Lucas is a drug lord who perceives himself as a businessman, allowing Washington to rebuild the traditional villain into a clever and low-key dictator. At that point in his career, the only other occasion Washington played a villain was in a 1990 Shakespeare in the Park production of Richard III. A good shepherd seldom ever needs to wave his staff, and a calm leader hardly ever needs to hoist a stick, as he has learned from Bumpy.

But when the herd gets out of hand, Lucas knows how to spruce things up. He is a mob leader, and mob rules exist for a reason. Cops are not shot at. It decreases the heat and is terrible for business. Lucas shatters a perfectly excellent piano door on the victim's head for killing a police officer. However, he has a quiet purpose to offer carpet cleaning advice in the aftermath. "Ey, ey, ey, ey, don’t rub on that. You blot that, ya understand? That’s Alpaca. That’s $25,000 Alpaca! You blot that shit! You don’t rub it, put the club soda on there," Lucas says, "simple Simon ass motherfuckers.”

Lucas in Washington also updated gangster dress codes. Movie gangsters typically wear edgy, flamboyant clothing. In The Public Enemy (1931), when Tommy Powers becomes wealthy, he buys a new suit as his first purchase. In the 1937 film Dead End, Humphrey Bogart's Baby Face Martin boasts about wearing silk shirts. Little Henry Hill, who makes his living by keeping the ice cold in Goodfellas, returns home in a brand-new gangster costume. Lucas trashes his clothes as Huey, the younger brother of Frank, enters a bar wearing "a very, very nice suit." He explains, "It’s a clown suit. That’s a costume with a big sign on it that says ‘Arrest Me.’ You understand? You’re too loud, you’re making too much noise.” 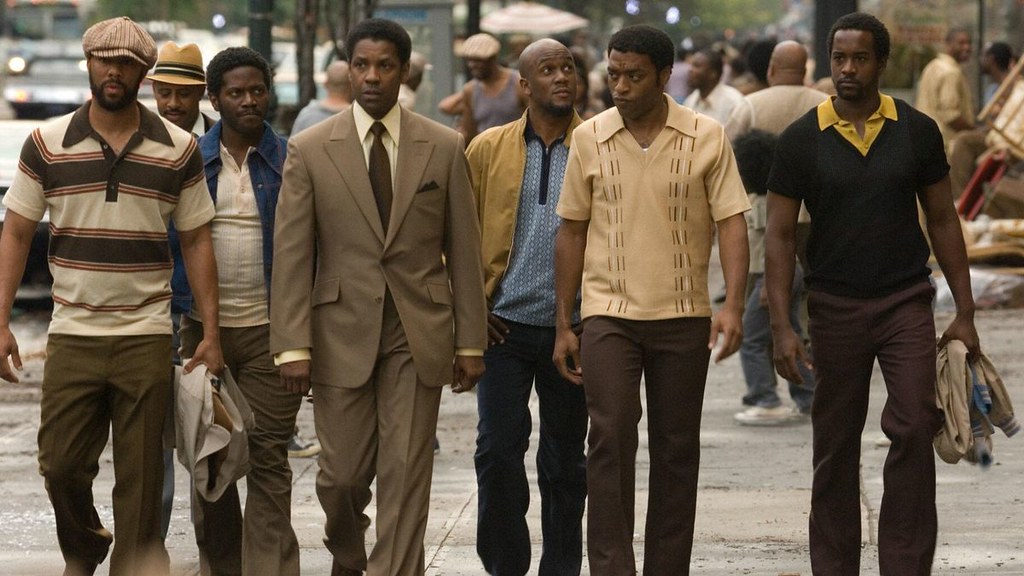 One of the quietest gangsters in movie history is Lucas. This quality comes from knowledge. He says, "The loudest one in the room is the weakest one in the room. This is evident in his attire. The ensembles in Lucas' films exude refinement rather than flare. He downplays the elegant and hardly ever goes kooky in his sandy brown, single-breasted suits with peak lapels, matching tie, and brown leather oxford shoes. When he does flex his material, it is at his wife's urging and is for the "Fight of the Century," the 1971 contest between Joe Frazier and Muhammad Ali, when he dons a $50,000 chinchilla coat and a matching $25,000 hat. The FBI observes the finery and he throws the coat into the fireplace.

American Gangster is a respectable entry in the mafia movie genre and also stars Chiwetel Ejiofor, Josh Brolin, Cuba Gooding Jr., John Hawkes, Carla Gugino, Ruby Dee, Armand Assante, and Joe Morton. Despite being set in the peak of Blaxploitation movies, it only features actual criminal drama. Director Scott expertly blends the two genres while maintaining a clear focus and simple plot. Although not graphically, the shooting gallery sequences are convincingly filmed. To prevent theft, the ladies who add "Blue Magic" to commercial products do it while completely undressed, without even a hint of a man's gaze. It is strange because it is business as usual. This is another proof of how Lucas challenged gangster authority.

The movie's two hours and 37 minute running duration is another fantastic feature. There is no wasted space, and the tale is given room to breathe. The actual Frank Lucas was detained in 1975, found guilty, and given a 70-year jail term. Due to his status as a government informant, he was only sentenced to five years. After being set out in 1981, he was returned to jail in 1984 after being found trafficking heroin. In 1991, he was ultimately released permanently.

At the film's conclusion, Denzel brings a different guy to the street. He is done. Gangsters don't often live lengthy lives. Rarely do they step down in movies. The Godfather flicks, New Jack City, and American Gangster are all more well-known than American Gangster, yet all of them are as epic. The dynamics are also subtly altered, and the only reason Washington's Frank Lucas isn't as well-known as Sonny Corleone is that he reigned quietly and left without a fuss.